What is the difference between Red/Blue vs. Broad “Full” Spectrum LEDs?

What is the difference between Red/Blue vs. Broad “Full” Spectrum LEDs? 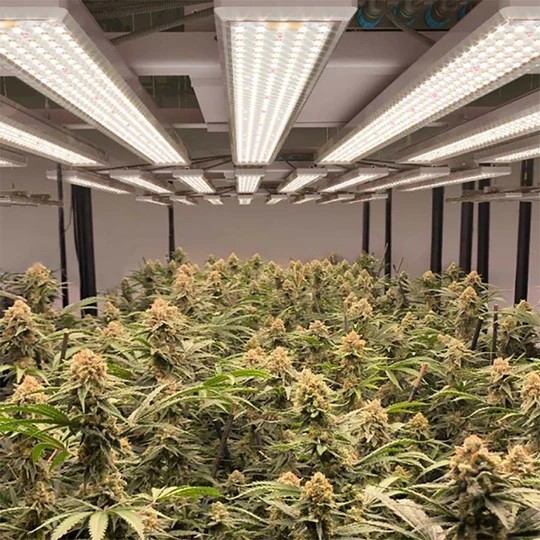 Growers generally have two options when it comes to horticultural LED spectrums – “full spectrum” or “broad-spectrum”, which appears as white light; and “red/blue spectrum”, which can appear as purple or pink light.

The red/blue spectrum LED luminaires are often referred to as narrow band spectrum lights – because the wavelengths they emit are within a narrow band of light. LED luminaires that emit a “white” light are often referred to as “broad spectrum” or “full spectrum” lights because they include a broad band of the light spectrum (more similar to the sun) which renders a “white” light (there are no true white wavelengths).

It should be noted that essentially all “white” LEDs are blue LEDs that are coated in a phosphor that converts the blue light into longer wavelengths. The phosphor absorbs the blue light and re-emits some or most of the photons into green and red light. This coating reduces the efficiency of the LED in converting photons into usable PAR (photosynthetically active radiation) light, but makes for a better work environment in sole source applications. The composition of the phosphor coating will help to determine the spectral quality of the white light emitted. To find the efficacy of your luminaire, you will need to divide the Photosynthetic Photon Flux (PPF) of the luminaire, by its input wattage. The resulting efficacy value, will be represented in µmol/J. The higher the number, the more efficient the luminaire is at converting electrical energy into photons of PAR. 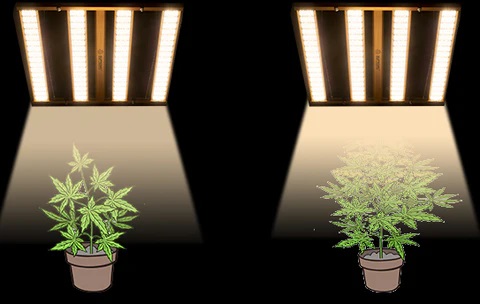 Red/blue LEDs are the most efficient at converting electricity into PAR light – making them also the most energy efficient.

The “purple/pink” LED luminaires that many associate with horticultural lighting, use varying combinations of red and blue LEDs, and are recommended for greenhouse growers who are already receiving the full spectrum of light from the sun. Since photosynthesis peaks in the red and blue wavelengths it makes this spectrum, not only the most efficient for plant growth, but also the most energy efficient. From this perspective, if you are already getting full spectrum sunlight from outdoors, it would make the most sense to put most of your energy into wavelengths that are most optimal for photosynthesis, and where you will see the biggest energy cost savings. This combination is more energy efficient than “white” or full spectrum LEDs because blue and red LEDs have the highest photon efficacy compared to other colors i.e. they convert the highest amount of electricity in photons, so you are getting more growth from your plants per dollar spent.

So, why do we need a combination of red and blue to grow plants, why can’t we use just blue or just red LEDs?

While red is most efficient for photosynthesis, having only red light would result in poor growth such as very elongated stems, so blue is added to keep plants compact and a more typical shape. On the other hand, you can’t grow plants under only blue light either, as their growth and development will be adversely affected. Researchers have found over the years, that having a combination high red light to a lower percentage of blue light has been shown to be optimum for the production of greenhouse crops that are already receiving light from the sun. Since there is no “ideal spectrum” for greenhouse crops, most LED manufacturers offer a fixed ratio of red to blue that has been deemed the most optimum for horticultural crop growth and production. 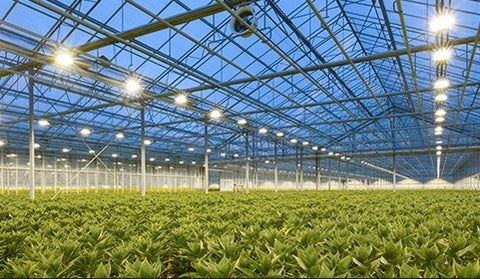 If you are a greenhouse grower looking to install LEDs, we recommend our Eagle series LED grow light Red White (Medium Blue) spectrum. This LED spectrum has a softer pink color, making it easier to work under and grade plants, than purple light, and has a high efficacy rating of 2.6 µmol/J -- reducing energy consumption by as much as 35% versus traditional HPS systems. Growers find it delivers great results -- either as a standalone LED installation or in a hybrid application (HPS-LED combination) -- across all stages of growth for many crops including vine crops, ornamentals; leafy greens and cannabis.

While in a greenhouse, the outdoor sunlight will balance out the “pink or purple” light emitted from LEDs, the same spectrum in a sole-source, indoor application delivers a limited spectrum of light to the crop and can be unpleasant to work under. Therefore, many indoor growers have shifted away from narrow spectrum LEDs, to “white” broad spectrum LEDs.

Broad spectrum LEDs have a lower efficacy than red/blue LEDs due to conversion, energy, and optical losses within the phosphor conversion process. However, since in indoor applications where the luminaires are the sole source of light, broad spectrum LED luminaires are far better than red/blue since they emit a wide range of wavelengths for your crop throughout the different growth stages. This is important because as we do more research, we are discovering that wavelengths such as green, which were previously thought of as not very useful, are proving to be important in photosynthesis and certain morphological responses. Additionally, many full broad-spectrum luminaires can also emit energy in the far-red region, which can help promote stem extension and leaf expansion. 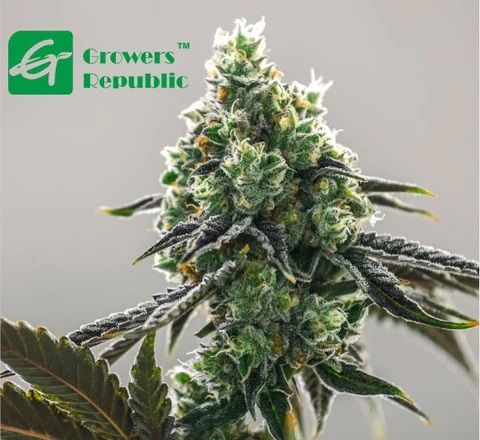 In an environment with only red/blue light, workers will not be able to properly identify problems such as nutritional deficiency, diseases and pests. So broad spectrum light is not only more pleasing to the eye, but also makes it easier to work and assess plant health.

So, while you can use a red/blue LED in sole source applications, with human health and plant scouting being affected, we highly recommend using a broad-spectrum LED. For growers in sole source applications, we offer a “daylight” spectrum option with the Eagle series LED grow light -- ideal for growth of indoor crops such as cannabis and leafy greens.

The next question we'd like to address is: “Is there an ideal or optimum spectrum for plant growth?”

The ideal spectrum of growth will largely depend on your application and the goals you want to achieve. So, an optimum spectrum does not really exist, because various plants and cultivars can have different responses to different wavelengths. We have seen this in crops such as cannabis and roses, where growing different species under the same wavelengths and environmental conditions resulted in very different growth responses. The best way to find out how your plant will perform, is to set up a trial area to test how different species will respond.

Since growth characteristics can be manipulated by various spectrums of light, you need to know what growth characteristics are most important to you. Since most growers want to ultimately achieve greater yields and quality, a specialized light spectrum is not necessarily needed. The spectrum of our Eagle series LED grow lights, has been designed for optimized yields and increased plant mass in greenhouse applications. The Eagle series LED grow light spectrum, is specially designed for sole source, indoor applications -- to be used throughout all stages of the growth cycle, as plants can take the wavelengths they need as they need them.

You might also be asking if you need to have different spectrums for different stages of growth, such as for vegetative versus flowering production cycles. Unlike, HID luminaires, where we would typically recommend CMH (ceramic metal halide) or MH (metal halide) luminaires for vegetative and HPS (high pressure sodium) luminaires for flowering cycles, you do not necessarily need two different spectrums when it comes to LEDs. What is more important during these stages, is light duration (such as photoperiod to elicit certain responses), and light intensity. As plants move from propagation to vegetative to flowering, light intensity should be increased in order to achieve maximum yields, quality and productivity, as light intensity is highly correlated to yields and overall quality.

LED luminaires should deliver a light quality optimized for plant growth and yields--while still allowing for flexibility of crop types and growth cycles, and a comfortable working environment. Typically, if you are in a greenhouse, you should be using LED luminaires with an optimized red/blue spectrum, since they are most efficient at converting electricity into useable light for plants. If you are in a sole source indoor grow, a broad-spectrum LED luminaire, which is optimized for all stages of plant growth and makes for a great work environment for workers, like our Eagle series LED grow lights.

Get in touch with us